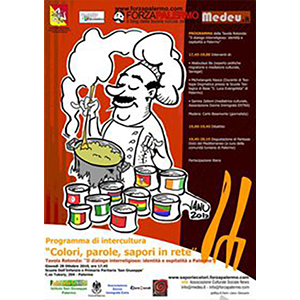 The event took place in November 2010 and promoted the encounter between the different cultures and traditions present in Palermo. It was organized by the Social Cultural Association News, the Medeu.it portal, the Forza Palermo.com blog, with the support of the Regional Department of Cultural Heritage and Sicilian Identity, and created in collaboration with the Cultural Association Extra, with the IPSSAR “Pietro Piazza”, with the Universitas Library, with the Institute  “San Giuseppe  delle figlie della croce” , with the Raneli Law Office and with the Amunì Step by Step and Fare Mondi Associations.

Nine seminars to talk about interculture, migrants’ rights and interreligious dialogue; a music workshop and ethnic cuisine combined with the colors and sounds of the immigrant communities of the city.

“The Open City: Interculture and Identity in Palermo” 2010 was a program full of events.